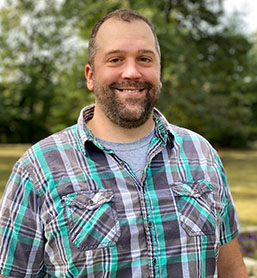 Patrick Holliday is the resident video editor at Paradigm Digital Group. He started his career at Fox 59, where he worked his way up to Senior Editor. After 8 years in broadcasting, Patrick shifted into event productions and worked on such projects as the National Football Foundation Annual Awards Dinner. In between the news business and event business, Patrick also picked up a degree in Web Design and Development.

Patrick is skilled in multiple editing platforms, as well as graphic design and web building. He has been a part of many special productions, including the Indy 500, the Final Four, the Super Bowl, and the College Football Hall of Fame Induction Ceremony. He is a husband, father, former football player, and pop culture expert.

Fun Fact: Patrick was in a band called Dudez-A-Plenti in college. They were…mediocre.