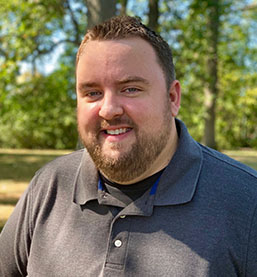 Joel Bragg is the newest member of Paradigm Digital Group and serves as our Video Editor. Joel graduated from Ball State University in 2012 with a Bachelor of Arts in Telecommunications and a focus in Production. In the past, he has worked as a camera operator and director for various live sports broadcasts. His past positions include working for Webstream Productions, FOX 59, and WTHR. Joel has been nominated for 5 Emmy’s and won his first in 2017 for his role as an editor in the team coverage for the Delphi Murders at WTHR. Joel comes to Paradigm with a creative eye for storytelling and a passion for telling a person or company’s story. He is experienced in various editing software including, Premiere Pro, Final Cut, Avid, and Edius. In his free time, Joel enjoys rooting for the Colts, Pacers, Yankees, and his alma mater, Ball State (chirp, chirp).

Fun Fact: Joel is a huge Chris Farley fan. He loved his style of comedy and can reenact scenes from his movies and skits from SNL.