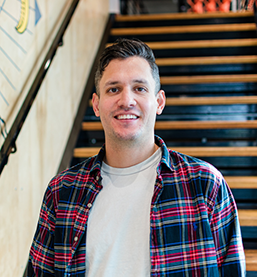 Alfredo Pando serves as our video production manager and is a graduate from Missouri State University with a bachelor’s degree in media production and theory. Alfredo’s background experience in television and film brings a certain level of quality and fun to the Paradigm team. From directing an Emmy nominated cooking show to photographing celebs, Alfredo’s passion for high-end production is evident. Alfredo has obtained special training and certifications to work on high-end cinema cameras from Abel Cine in Chicago and has years of experience working with them. This is not Alfredo’s first time managing video operations as he has years of experience managing creatives, directing and overseeing a video department. His creative pursuits combined with his technical knowledge make him a great fit to Paradigm’s team.

When he isn’t framing up his next best shot Alfredo enjoys spending his time with his wife Lakyn and their dog Chloe. The three of them enjoy doing group costumes for Halloween and pretending the costumes were Chloe’s idea all along. He is an avid guitarist and tequila connoisseur and loves to play soccer and basketball on his time off.

Fun Fact: Alfredo was born in the city of Chihuahua, Mx. Yes, like the dog.